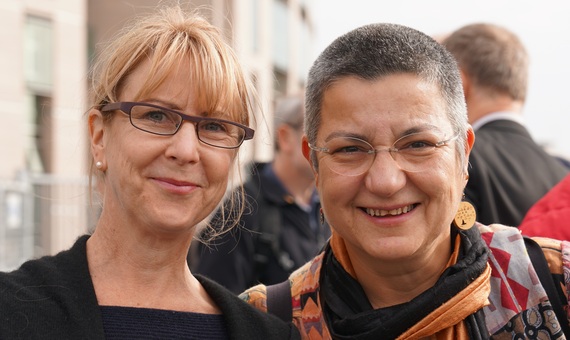 PHR continues to call for end to persecution of Fincancı, all human rights defenders in Turkey.

A criminal court in Istanbul today again postponed the trial of prominent human rights defender Dr. Şebnem Korur Fincancı, president of the Human Rights Foundation of Turkey and a longtime friend and colleague of Physicians for Human Rights (PHR). Last spring, Dr. Fincancı and two co-defendants were arrested, briefly imprisoned, and charged for disseminating “terrorist propaganda” after taking part in a solidarity campaign with a newspaper critical of Turkey’s government. Proceedings will resume March 21. PHR today reiterated its call to drop all charges against Dr. Fincancı, her co-defendants, and other members of civil society who are being unjustly prosecuted.

“The continued persecution of Dr. Fincancı is antithetical to the rule of law, a brazen attempt to silence one of Turkey and the world’s most respected human rights defenders,” said PHR executive director Donna McKay. “Throughout her career, Dr. Fincancı has done nothing but support the rights and freedoms of others. And for that, she is being punished. In its quest to rid the country of any and all dissent, the Turkish government is using the excuse of terrorism and national security to persecute anyone who dares to speak out against it. Dissent, advocating for the rights of others, investigating impunity: those are not crimes.”

Last November, a delegation from PHR joined an international observation mission and solidarity rally for Dr. Fincancı, her co-defendants Erol Önderoğlu and Ahmet Nesin, as well as thousands of other human rights defenders and activists currently being persecuted by the Turkish government. Dr. Fincancı, a forensic physician, has spent much of her career fighting torture and ill-treatment in Turkey and globally. Alongside anti-torture experts from around the world, Dr. Fincancı and PHR collaborated in the creation of the Istanbul Protocol, considered the international standard for forensic investigations of torture.

“Dr. Fincancı should be celebrated for the incredible work she’s done to use the power of science and medicine to defend the rights of the vulnerable. Instead, she is being held in legal limbo, forced to endure imprisonment and now an opaque legal process. The Turkish government is hoping those of us in the international community will forget about Dr. Fincancı and her colleagues. We are not going anywhere. We will not back down until these charges are dropped and Dr. Fincancı and her co-defendants are exonerated.”

In addition to targeting Dr. Fincancı, Turkish authorities continue to detain Dr. Serdar Küni, also a member of the Human Rights Foundation of Turkey. Dr. Küni is the Foundation’s representative in the southeastern Turkish city of Cizre, where last year Turkish security forces imposed a curfew as part of a larger unlawful imposition of a state of emergency across the country’s southeast. In August, PHR reported on repeated human rights violations by Turkish authorities in the region.

“Dr. Küni, Dr. Fincancı, and the entire community of medical human rights professionals are under threat in Turkey,” said PHR’s McKay. “Every day, they place the principles of justice and humanity ahead of their own personal comfort and safety. We urge Turkish government prosecutors to drop these absurd charges that diminish Turkey’s standing in the world and its claims at being a just, rights-abiding society.”