By the Rules: Comparative Study on the Legal Framework of Torture in Turkey and Israel 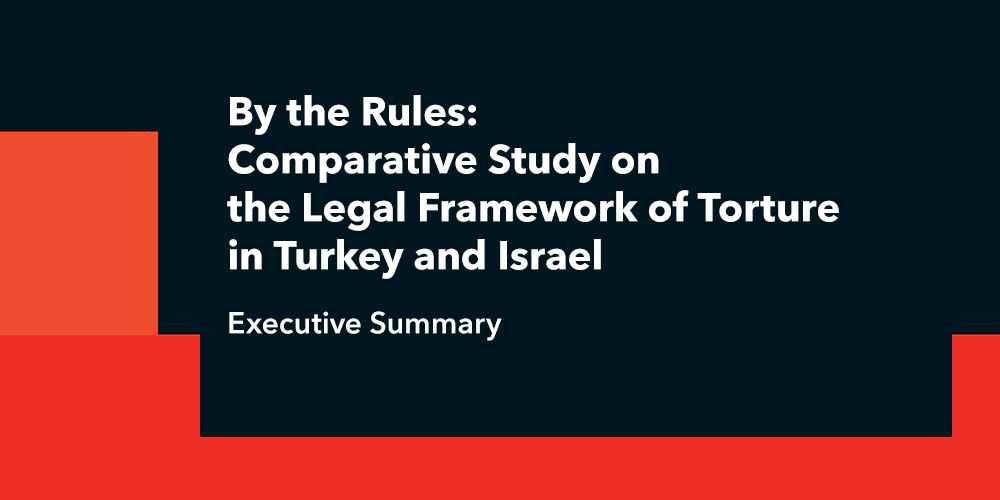 This research began by questioning the root causes of impunity for torture and other forms of ill-treatment in Turkey and Israel. Our main focus was the means by which states construct the regime of impunity. Yet in examining this question, we have been motivated not only by an academic curiosity regarding the nature of impunity but also by the hope of finding common tools in the fight against torture.

There are several glaring differences between Israel and Turkey, in terms of their respective size, history, and ethnic and religious makeup. Yet the two countries do share significant similarities, not only by virtue of their relative geopolitical closeness but also — and mostly — in terms of the challenges encountered by the state’s sovereignty. These include significant ethnic tensions, increasing protests by citizens over economic and political issues, political factions debating the state’s democratic character, and continuous violence and unrest in neighboring countries.

The two countries also share a harrowing history of widespread and systematic torture in the 1980s and 1990s. Since then, the frequency and nature of torture have changed in different ways, which will be examined in the research.

This comparative study sets out to provide a portrait of the legal and procedural frameworks relating to torture in both Israel and Turkey and the realities they take part in shaping. In particular, the study will address the definition and regulation of torture and ill-treatment in criminal law; the effectiveness of these in practice; whether criminal procedural law enables effective prosecutions in cases of torture and ill-treatment; and the implementation of procedural law.

The concepts of ‘state security’, ‘public order’ and ‘emergency situation’ are widely used to allow, justify, and protect torture through various state institutions. The current study aims to show that, in the Israeli case, explicit mentions of state and public security function as an organizing principle for the State’s treatment torture and abuse- from substantive legislation, through the procedural rights of detainees, to investigation and punishment of torture. In the case of Turkey, these concepts, with particular focus on public order, are essential in understanding the practice of torture and the weakening of procedural safeguards.

We have throughout attempted to assess the practice of torture and its investigation by referring to internationally accepted principles and standards. The study first assesses the domestic provisions in both countries’ laws which enable impunity after acts of torture and other forms of ill-treatment, according to international standards. The second variable in this research is the procedural safeguards which are meant to ensure the efficacy of the measures to prevent torture and other forms of ill-treatment. We, therefore, also evaluate here the legislation which ensures procedural safeguards and their implementation.

Chapters 1 presents the picture in detail: we discuss the practice of torture law: what type of offenses, if at all, are used to prosecute state officials for acts that amount to torture or other forms of cruel, inhuman or degrading treatment; and what are their consequences in terms of indictments, punishments, deterrence, and vis-à-vis demands of international law.

Chapter 2 then presents the authority, structure, and practice of official investigation and prosecution bodies that handle complaints of torture. Relevant monitoring authorities are similarly examined. In light of these, derogations of detainees’, and specifically torture victims’ procedural rights are scrutinized, in law and in practice.

The question posed is whether one can identify similar patterns in the two countries, which allow them to avoid taking responsibility for their current and ongoing use of torture, and resist complying with international treaties they are party to. Our research suggests that such similarities in the pattern do indeed exist, despite the differences in the application; and that this leads to particular practical recommendations in the struggle against torture and impunity.

Admittedly, there is much more work to be done in each country and in drawing specific comparisons between them, especially by gathering empirical data on how laws and regulations come into play and analyzing them critically. In addition, a historical analysis specific to the two countries is not included, focusing instead on current conditions. This study should, therefore, be viewed as a preliminary case-study in highlighting key issues. Our hope is that it will serve as the basis for further analysis, both in the specific cases of Turkey and Israel and in other regions and states.